Away for a while

I'm going to be away for a while without time to update this blog.

Even though I sold it 6 months ago, the BWP meltdown has really affected me and how I want to approach building a passive income stream going forward.  I'm done speculating on high risk/high yield stocks.  No more playing with fire for extra yield... LNCO and EIFZF have to go.  This will be quite a daunting task because I'll need to replace about $500 worth of annual income between the two.  I'm gonna to have to use the proceeds from the sales plus a lot of additional capital to keep my income stream intact.  In fact I'm lucky to have a healthy amount of reserve cash at the moment or else all this would be impossible.  I have a plan for replacing the lost income which includes buying MO, OHI, TD/TU, BP/COP, PEP, TGT/MCD and DE/GE depending on market prices.  Yep, 7 stocks.  I'm still comfortable with big tobacco & REITs; new PEP shares have already been purchased.

See you in March!
Posted by Compounding Income at 3:48 AM 36 comments:

I went with Walmart this week.  I'm pleased to add a few additional shares of this company to my holdings, but that's not really on my mind today.

Back in August I sold Boardwalk Pipeline Partners LP (BWP) when it became apparent distributions would remain frozen.  At the time this decision wasn't easy.  After all I had held it for two and half years during which it provided 6 distribution boosts and sent me hundreds of dollars in steady income.  $761.26 to be exact!

It turns out this company was in even worse shape than I imagined.  Yesterday it cut quarterly distributions from $.5325 to $.10 per quarter.  That's a 82% reduction folks.  OUCH!

Look at this chart:
Had I continued holding, my income stream would have been crushed and to make matters even worse principle would have evaporated right before my eyes.  You can't replace an income stream once you lose 56% of your principle!  This has to be my best sell ever, and there are many lessons to be learned here.  The most valuable of which is to stick with quality and always keep an eye on your holdings. PG, KO, PEP, MCD, CVX, JNJ.  Those are all high quality companies that have been raising dividends for decades.  They aren't sexy and they won't make you rich overnight.  But nobody ever went broke buying Procter & Gamble, and nobody ever went broke buying Johnson & Johnson!  They all have huge moats and treat shareholders like royalty.  3 of those companies have raised dividends for over 50 years... think about how hard that would be to replicate... damn near impossible if you started today!  Monitor companies and keep an eye out for warning signs.  Many times (not always) the writing is on the walls.

Boardwalk warning signs I was able to identify before the meltdown:
-Frozen dividends:  A huge warning sign that should never be completely ignored.
-Thin distribution coverage:  Dividends and future dividend increases are paid with cash.  BWP couldn't afford to pay more even if it wanted to.
-Management refused to discuss dividend increases on conference calls:  Pretty fishy coming from a company on the CCC lists that had done a crap ton of increases in the past.

You can go back and read my August 2013 post about the sale, I'm not hiding anything here.

Don't let the CCC lists or high yield fool you, a 5 year dividend growth streak isn't all that impressive.  Stick with quality!
Posted by Compounding Income at 9:52 PM 12 comments:

Unilever Hasn't Cut Dividends in the Past Decade

This is simply a quick post to clear up misconceptions about Unilever's (UL/UN) dividend.  If one was to look closely at this company they might notice common shares come in a variety of different classes.  I personally chose UL for my portfolio (to avoid dividend withholding taxes), but I do recognize dividends are paid in Euros then converted to other currencies like US dollars.

As you can clearly and  beyond any doubt see, this company has a long and robust dividend growth streak in place.  US and Canadian investors receive dividends in dollars and might mistake currency fluctuations as dividend cuts.  It's ridiculous to expect an European company to pay dividends in dollars, therefore we ought to expect currency fluctuations from our foreign holdings.  It's a fact of life.

I'm not recommending this stock to others, but I do own it myself.  Have an awesome weekend!
Posted by Compounding Income at 8:54 PM 157 comments:

Wow I had horrendous timing today!  I typically make my purchases in the morning before reporting for duty, little did I know the market would sell off in grand fashion.  Only a few hours after purchase these companies were trading at much lower prices.  I've always known that I stink at market timing.  That's why I have been dollar cost averaging with monthly purchases over the years.  Terrible timing aside I still picked up shares in quality companies that are extremely likely to raise dividends going forward.  One day I hope to live primarily off dividend income.  These shares are valuable towards that end.

While I could have saved a couple bucks if I knew how to predict market movements, I'm actually very pleased the heated stock market is finally falling back down to earth.  I still have 3 more planned purchases earmarked for the coming weeks.  I'm heading out of country pretty soon (for a military mission; it's not a vacation).  I won't have much time for investing, plus buying stocks is more difficult in a time zone half way around the world.  Not sure if I'll have reliable internet access either.  Some of the companies I'm looking at include ABT, JNJ, KO, MMM, PG, TGT, and XOM,.  I want to add high quality now that valuations are more reasonable.

I have many free trades available and did not pay commissions today.  I plan to continue small weekly purchases until my supply of free trades run out (probably July). 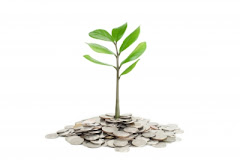